Lily's novels are published in many countries including the United States, the United Kingdom, France, Germany, Spain, Sweden, Turkey, Russia, Hungary, Greece, Israel, Finland and the Netherlands. Her books have been translated into over 30 languages.

Lily lives in Oxford with her husband, son and pug Norman.

...the wit of a zany angel. - Dick Adler - The Chicago Tribune

...cooks up a cinematic yarn full of characters so rich you'll fear they're fattening, but readers will be sure to splurge on this saucy tale chock full of sex, recipes and murder. Publisher's Weekly 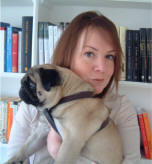